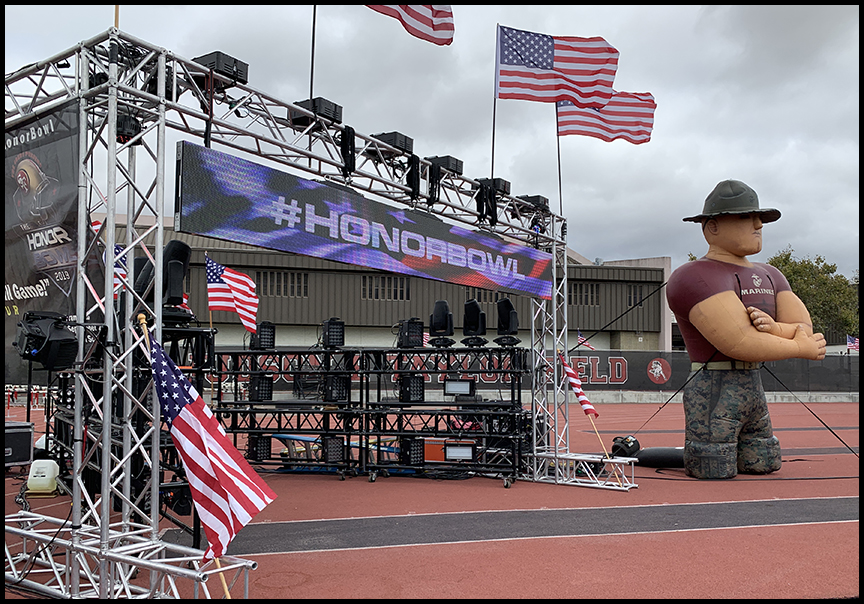 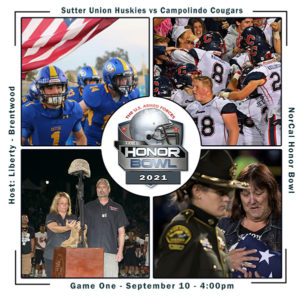 Game One of the 2021 Honor Bowl is a small school matchup with two teams that have championships between them and will bring it on Friday. Visiting Sutter has tried to be part of The Honor Bowl for a couple of years and Head Coach Ryan Reynolds jumped to be part of the 2021 Showcase especially after the 2020 event was canceled. The Huskies went 12-2 in 2019 and again was the Butte View League Champions and were a finalist in the CIF NS DIII sectional game.

Home Team Campolindo will be part of their second Honor Bowl and is up for the challenge. Head Coach Kevin Macy is happy to have another opportunity to support our military as the Cougars continue to do throughout the season. Campolindo has a strong tradition of honoring the Military by participating in activities that involve Navy Seals and fundraise for groups that support veterans. The 2019 season for the Cougars ended as a finalist in the NCS DII and Diablo Valley Champions with a 10-3 record.

#ButtevsDiablo – These schools ‘get it!’ 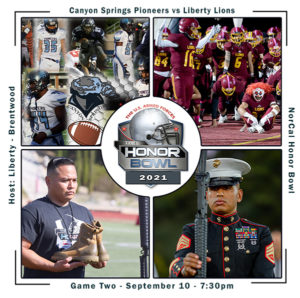 Game Two of the 2021 Honor Bowl is a Friday night matchup between visiting Canyon Springs and Liberty Lions before their home crowd on Friday. Visiting Canyon Springs, a perennial Nevada 5A powerhouse will experience The Honor Bowl for the first time. Head Coach McGee was thrilled to find out that his Pioneers would be in the NorCal event for 2021.   The Pioneers will have a good return squad led by rising senior QB Nyis ‘Quavayion.

Home team Liberty will be in their third Honor Bowl and first as the host for the 2021 NorCal Honor Bowl. The 2019 game came down to the final play in OT when Liberty blocked a PAT and beat Clayton Valley. New Head Coach Matt is up for the task to be the host school and knows the city of Brentwood will be supporting the Lions and what The Honor Bowl provides besides great football. In 2019 The Lions went 9-2 and ended up in 2nd place in the tough Bay Valley League. We are excited to have the first out of State team to play in the Bay Area NorCal Honor Bowl AND having the 2021 Honor Bowl hosted by a patriotic area of Central California. 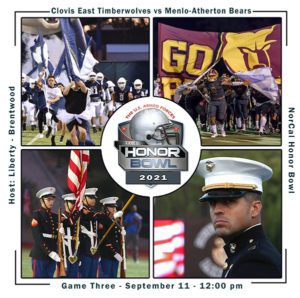 Game Three of the 2020 Honor Bowl will be a great start of three games on the final day of the two-week showcase.

The Visiting Clovis East Timberwolves will be the first team in The Honor Bowl from the Fresno area! Head Coach Ryan Reynolds has experienced two other Honor Bowls when he was DC with Clayton and jumped at the chance to participate as a Head Coach! Clovis East finished 4-7 in ’19 and is in the TRAC, one of the toughest leagues in the state! Watch for returning QB Sean Kelly, an athletic and intelligent player. Matthew Mejardo is returning as Center and a core leader. OLB rising Jr Devin Lopez will play on both sides of the line as a RB. DL Richard Garcia and Brandon Contreras will anchor the D Line.

Home Team Acalanes Dons travel in from Lafayette.  Head Coach Floyd Burnsed will lead his team who finished in a 3-way tie in the tough Diablo Foothill League and made it into the Semifinals in the CIF NCS DIV sections. Returning rising senior QB Brady Hutchinson is looking forward to his senior year after passing for 2,646 yards and 29 TDs. RBs Dane Jensen and Nic Rossi will carry the ball and will contribute. On defense, OLB Niko Cortessis (Sr) and DE Joey Carrillo (Sr) will do what they can to stop drives.

#BayAreavsFresno – East Bay and Fresno Battle It Out! 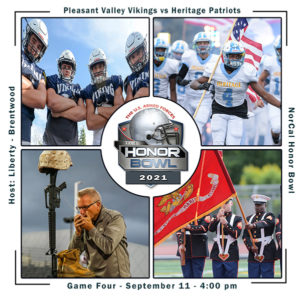 Game Four of the 2021 Honor Bowl will be a matchup with two teams that bring it.

The Visiting Pleasant Valley Vikings will be the first team in The Honor Bowl from the Chico area! Head Coach Mark Cooley was thrilled to have an opening in the ’21 schedule to bring his team down for an amazing game and educational experience! Coach Cooley also schedules a tough pre-league and understands the importance to prepare to travel in competitive games.

Home team Heritage, also from Brentwood has head coach Dave Fogelstrom in his second season for the Patriots. In the short 2020 season, the Patriots ended up 4-2 in the tough Bay Valley League. Fogelstrom will guide his team to continue pushing for success and The Honor Bowl will be one of those games that the Patriots will play before a raucous Brentwood home crowd. 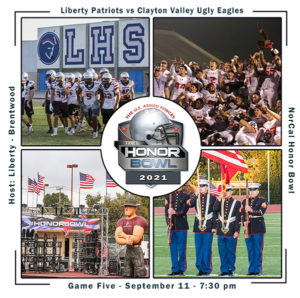 The Visiting Liberty Patriots travel to NorCal from Bakersfield to finally be in the Honor Bowl. They had been scheduled to play in 2020 in SoCal and were of twenty teams saddened that the event was canceled. Head Coach Bryan Nixon was adamant to be part of the showcase in 2021 and we are pleased they will have the opportunity to experience why The Honor Bowl is ‘more than just a football game!’

Home team Clayton Valley will be in The Honor Bowl for the third time. Head Coach Tim Murphy thanks us for another opportunity to play in ‘one of the best showcases’ he has ever been part of! In 2019, the Ugly Eagles season became the CIF-NCS DII Champions, DII NorCal Champions and finished the season as the CIF D2-AA State Champions. Clayton Valley only allowed an average of 10 points a game throughout the playoffs with only 2 turnovers in 5 games.  Head Coach Tim Murphy was voted Bay Area Coach of the Year and has strong returners from the ’20 season.

This is the third of three games that will have a strong patriotic presence especially with the 20th anniversary of 9/11.