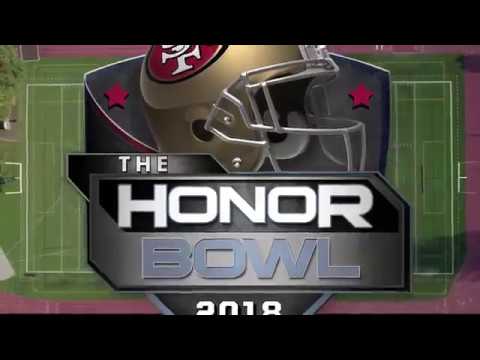 SANTA CLARA, Calif. – The Honor Group, Inc., a nationally recognized non-profit that educates youth, coaches, and community about the needs of our military veterans, today announced event details around the introduction of their flagship high school football showcase to the San Francisco Bay Area in 2018. The San Francisco 49ers, preparing to celebrate the National Football League’s “Salute to Service” initiative on Sunday, are proud to align with The Honor Group and its mission to celebrate the military and the sacrifices they make on behalf of our country.

In partnership with the San Francisco 49ers, the organization is bringing The 2018 Honor Bowl and its ten-team, five-game and two-day format – featuring some of the nation’s best high school football – to Saint Francis High School in Mountain View on August 24-25, 2018. As the host school, the Lancers will also participate in one of the marquee games including nationally ranked varsity football teams competing from multiple states. The other participating teams will be announced at a later date.

“Our school is pleased to join with this proud organization to host the 2018 Honor Bowl here at Saint Francis and to partner with The Honor Group and help their mission which we totally respect,” said Michael Pilawski, Director of Athletics at Saint Francis. “We have heard so many positive things about this powerful event and are looking forward to partnering with the Honor Group organization to help make the northern California Honor Bowl a positive success.”

The venue will provide a true high school ‘Friday Night’ setting that respects great high school football while raising money in support of military veterans. The Honor Bowl motto is ‘It’s more than just a football game’ due to the strong relationship and visual presence with the US Armed Forces, Gold Star families and injured, ill and wounded veterans.

The Honor Group is based in Sacramento and was founded in 2013 by two high school football coaches and a Gold Star mother whose son was killed in action in Afghanistan.

The San Francisco 49ers announced a three-year partnership with The Honor Group back in August to serve as the presenting sponsor for the game and help expand its reach to Northern California. The 49ers are aligned with The Honor Group in working to educate youth while also lifting up and supporting injured, ill and wounded military veterans.

“The Honor Bowl represents everything that is great about sports and competition and we look forward to helping The Honor Group put on an inspiring event at Saint Francis next August,” said 49ers president Al Guido. “The relationship between our organizations came together due to our shared values of supporting youth football and educational opportunity, as well as the active and veteran military who defend our country.”

“Bringing together students, coaches and the community through sport to raise awareness of the sacrifice of our veterans is core to the Honor Group,” said Mark Soto, The Honor Group Executive Director and Founder. “Over the years we have grown into the best pre-season high school football showcase in America and we’re excited to bring the 2018 Honor Bowl to the Bay Area. Students, fans, media and the community will have a first-hand chance to experience this amazing event.”

During the two-day celebration of high school football and military, the participating teams will visit Levi’s® Stadium to spend time with wounded warriors, Gold Star parents and 49ers alumni. Ahead of the games, a decorated wounded Marine or soldier will visit the team’s locker rooms. Before each game the fans are greeted by on-field military pageantry with a primary focus of bonding and educating the students and fans in attendance about patriotism, honor, and sacrifice. Over the past six years The Honor Bowl has hosted over 64 varsity football teams from seven different states.

About the San Francisco 49ers
The San Francisco 49ers, owned by Denise and John York, currently play in the NFC West division and have won five Super Bowl trophies including Super Bowl XVI, XIX, XXIII, XXIV and XXIX. The franchise also has six conference championships and 19 divisional championships and was the first major league professional sports team to be based in San Francisco more than 70 years ago. Please visit www.49ers.com and follow the 49ers on Facebook and Twitter @49ers.

About The Honor Group, Inc.
The Honor Group is a nonprofit whose sole purpose is to educate students, coaches and communities about the needs of our military veterans. Providing service and education through athletic events and school assembly’s. The 2018 Honor Bowl™, managed and produced by The Honor Group, Inc. will be held in Northern and Southern California with teams participating from many different states. Funds raised by the nonprofit and through their events help equip wounded military veterans with much needed items and resources to assist them in returning to civilian life. The Honor Group relies on partners and volunteers who share the passion to make a difference. For more info please visit our website at www.thehonorgroup.org